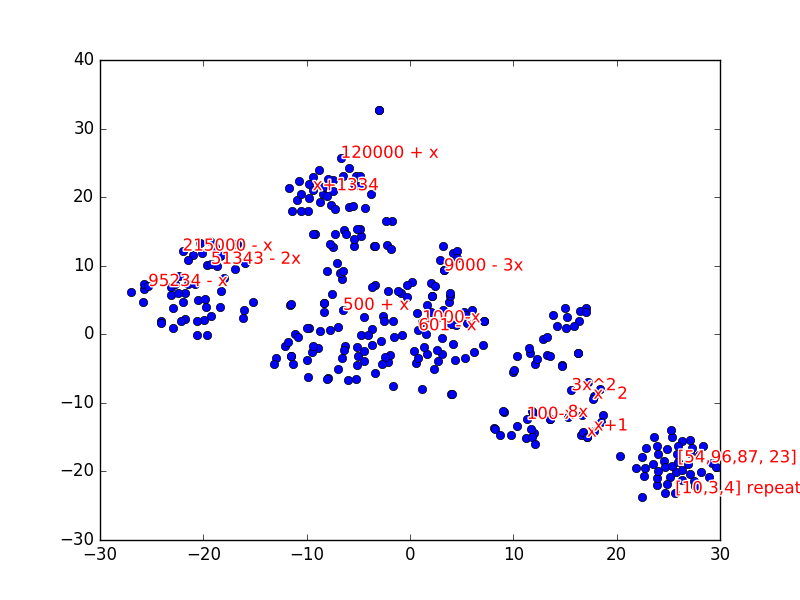 Encoding numerical inputs for neural networks is difficult because the representation space is very large and there is no easy way to embed numbers into a smaller space without losing information. Some of the ways to currently handle this is:

In small integer number ranges, these methods can work well, but they don’t scale well for wider ranges. In the input scaling approach, precision is lost making it difficult to distinguish between two numbers close in value. For the binning methods, information about the mathematical properties of the numbers such as adjacency and scaling is lost.

The desideratum of our embeddings of numbers to vectors are as follows:

In this blog post, we will explore a novel approach for embedding numbers as vectors that include these desideratum.

The architecture of the system consists of three parts: the encoder, the decoder and the nested RNN.

The encoder is an RNN that takes a number represented as a sequence of digits and encodes it into a vector that represents an embedded number.

The nested RNN takes the embedded numbers and previous state to output another embedded vector that represents the next number.

The decoder then takes the embedded number and unravels it through the decoder RNN to output the digits of the next predicted number.

Let \(l_i\) be the number of digits in the i-th number of the sequence (including <eos> digit. Let \(E\) be an embedding matrix for each digit.

Let \(\hat{y}_{i,j}\) represent the distribution of digits for the prediction of the j-th digit of the (i+1)th number of the sequence.

Since I also find it difficult to intuitively understand what these sets of equations mean, here is a clearer diagram of the nested network:

After 10,000 epochs of 500 sequences each, the networks converges and is reasonably able to predict the next number in a sequence. On my Macbook Pro with a Nvidia GT750M, the network implemented on Tensorflow took 1h to train.

Taking a look at some sample sequences, we can see that the network is reasonably able to predict the next number.

With the trained model, we can compute embeddings of individual numbers and visualize the embeddings with the t-sne algorithm. 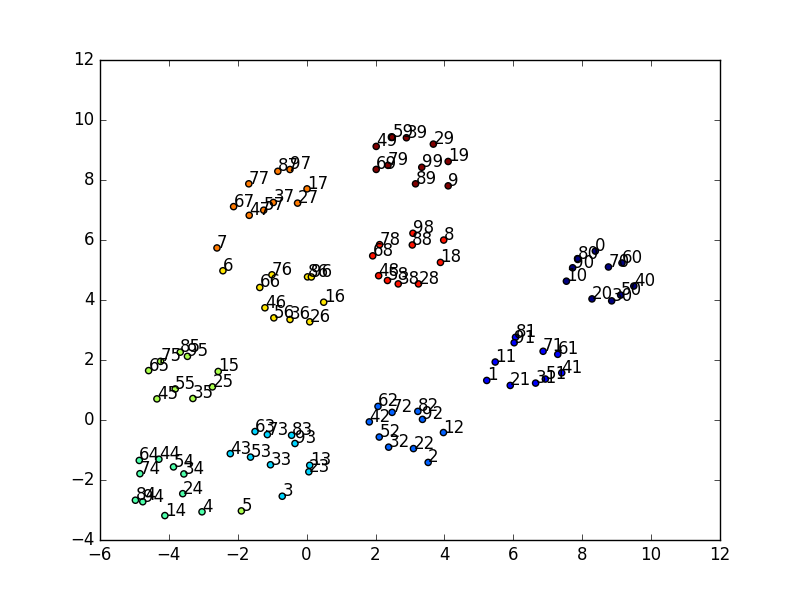 We can also trace the path of the embeddings sequentially, we can see that there is some structure to the positioning of the numbers. 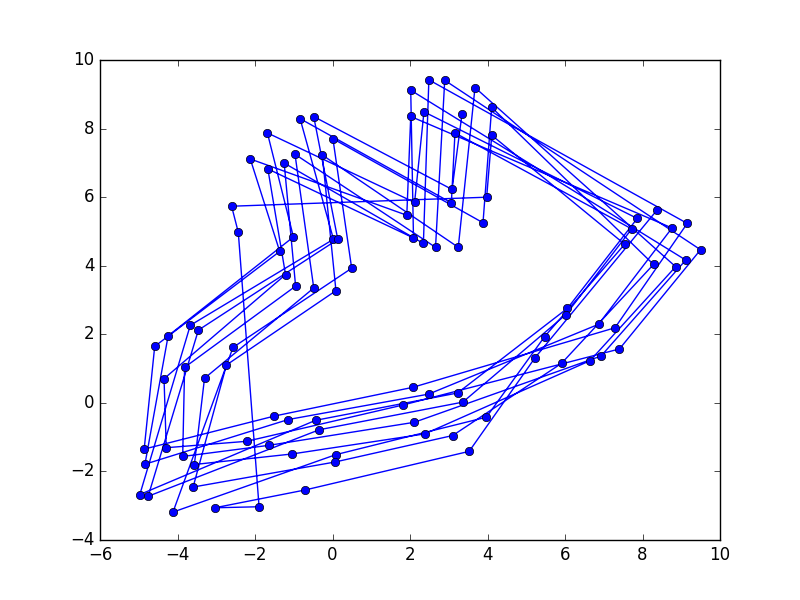 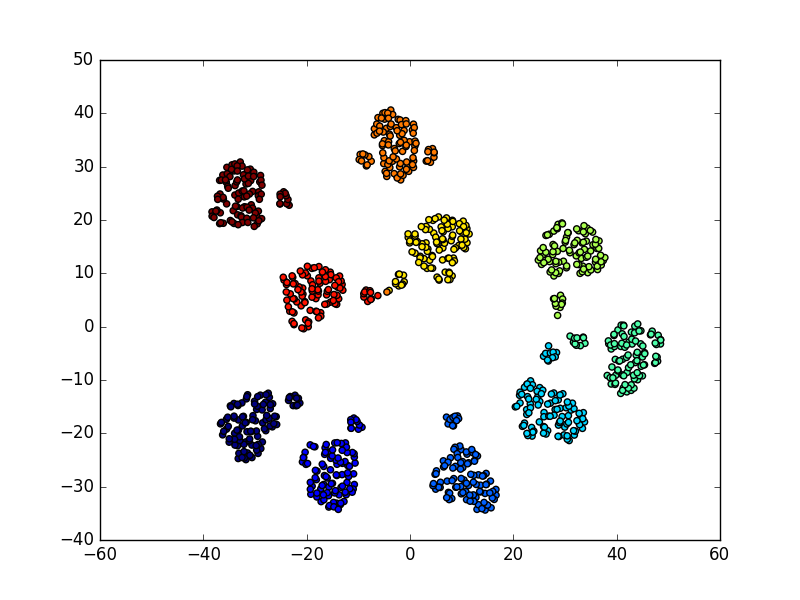 We can also see the same structural lines for the sequential path for numbers 1 to 1000: 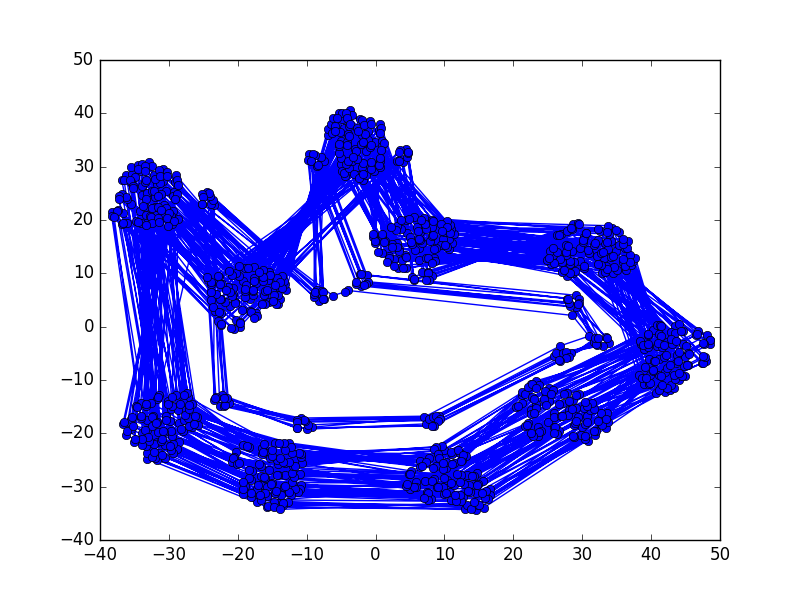 We can also look at the embeddings of each sequence by taking the vector \(\vec{s}^n_k\) after feeding in k=8 numbers of a sequence into the model. We can visualize the sequence embeddings with t-sne using 300 sequences:

Using this, we can see that if we encounter a sequence we can’t determine a pattern for, we can find the nearest sequence embedding to approximate the pattern type.

The model is written in Python using Tensorflow 1.1. The code is not very well written due to the fact that I was forced to use an outdated version of TF with underdeveloped RNN support because of OS X GPU compatibility reasons.

The code is a proof of a concept and comes from the result of stitching together outdated tutorials together.